There is nothing better than a summer morning, just as the sun rises and being in the garden!  The sound of business only come from the birds chirping and the occasional crow from our little rooster.  The air is still cool and calm.  Bliss!

First stop is the goats. Getting their morning ration of hay, grain and giving Ivy a check, which is due to kid any day now.  She is nice and round, but no signs that she will be giving birth today.  The anticipation of new little kids hopping around keeps me going to the barn several times a day with excitement.

Watering chores are done early before the heat to arrives.  My favorite tool is a watering wand, the gentle flow of water is soothing to me and with the many potted plants around the garden, a little joy in a chore never hurts.

Checking the potato crop, I noticed the purple blooms. So a little digging around in the deep mulch layer found a handful of new potatoes for dinner tonight.   These are my favorite type of potatoes.  While the potato crop grows, I continue to mulch with compost around the plant, piling higher and higher until the compost reaches about a foot thick, making a perfect bed for new potatoes and a super easy harvest.  New potatoes are so succulent and tender, they melt in your mouth.  Their little skin just falls right off with the slightest rub.  Cut into fourths, tossed with some fresh herbs and olive oil, grilled or  baked makes a great easy side dish for a summer supper.  Fresh!  Luckily we will harvest new potatoes for the new several weeks until the foliage starts to die back, then it’s time for the main harvest.

Boysenberries are in full swing now and picking daily is a must!  Purple hands are a dead give away where I has hiding out this morning.  Morning is the best time to pick most crops, as they are usually sweeter and juicier.   A rustic berry tart is on the dessert menu tonight!  They get an extra drink of water while they are fruiting.  We are looking forward to the Triple Crown Blackberry harvest coming up shortly.  They are loaded with green berries and white blossoms. I planted a Triple Crown Blackberry on our back patio winding around one of the pillars.  What a fun focal point. And, you can eat it too!  A toss of some acidic rich fertilizer for the last time this year and a layer of compost over the top gives them a boost and promotes healthy new growth for next years berries as well. 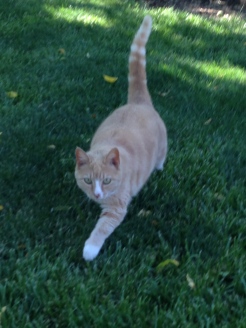 My two garden helpers, Casper and Mabes are on the prowl lurking around the bushes

as we go from spot to spot making sure they don’t miss out on anything.  Casper is getting up there in years, but still enjoys the garden. While we adopted Mabes, a six-year-old active cat about two months ago, hoping for a mouser, when in deed, again, another cats whose only interest is in the delectable food easy captured in her bowl, but chasing butterflies seem to be a favorite. As well as Casper, Mabes has keen typing skills (computer terrors) as well. She has been a fun addition to the little farm.

The last of the peas were harvested this morning.  Hot temperatures slowed up the crops enough to warrant a new crop in their place.  Pickling cucumbers will replace their spot after a good amendment of compost goes in.  In six weeks time we will be adding to the  pantry, dilly pickles, bread and butter pickles and some sweet gherkins.

Light pruning, weeding and harvesting every morning keep things under control and while these could be daunting at times if not kept under control, a little work in the morning goes a long way and brings peace to the soul.

Filed under Casper the Cat, Fruits from the orchard, Gardening, Goats, Life on the Farm

Boysenberries bring me back to summer time cookouts with that beautiful dark purple color thick syrup oozing out of the perfectly browned flaky pie crust my mother used to always bake!

When I was a kid I remember a patch of boysenberries out in the back yard, loaded with big boysenberries.  I’m sure they never got  the ripeness that makes them sweet, because I remember puckering up several times, but who could wait!  If only I could have waited until they had a slight softness and came off with the slightest pull.  KIDS!

Once I had established a home and a spot (ha ha, temporarily) to grow berries, boysenberries were the first to go in.  I put them on the north side of my garden in full sun.  This was my first raised bed!  With a lot of compost, a little fertilizer and love they flourished.  The first year we got a bumper crop!  ONE BIG handful.  Granted, I did plant in early summer, so they didn’t have much time to produce flowers, but the root system was hard at work.  The second year a far cry from the first.  We ended up with three harvests the first gave us over 2 gallons.  This was off of four bushes crammed together in a space of 2×8.  After several years of growing my boysenberries in the garden, I decided to move them to their new home.  I started to get runners popping up in the neighboring veggie spots and…..I needed more space for growing garlic!  Late full I amended a new spot in full sun in the back of the orchard.  Lots of compost, a little peat and plenty of water to get them off to a running start.

Boysenberries love warm weather, and don’t seem to mind the bright sun here in sunny Southern Utah.  There are thornless varieties, which I have tried both, but the production has been less for me.  Pruning can be a little prickly, but a good pair of gloves will take the bite.  Most brambles produce higher yields when staked.  I use a simple method of two t-posts on each side of the boysenberry row with three wires pulled between.  I keep the flowering vines (last years canes) tied up and let the new canes, which will produce next year, bramble on the ground.  You can tie these guys up, but I don’t mind and it makes pruning the right canes later down the road much easier.  Once you have harvested your berries and there are no more flowers on their way, cut back the canes that produced.  These are two year canes.  Tie up the canes that grow this year, 1 year  canes.  Fan out to make room and if the canes are very long, 8 foot or more, cut them back to six foot to produce side shoots.  These side shoots are big producers, so encourage it!

In early spring, just when the leaves start to grow, give them some food.  I use an Acid Mix fertilizer because berries do better when the soil pH is on the acidic side.  Sprinkle 5 pounds per 50 ft row.  Toss three to four inches of compost on.  Our soil pH here is high, so I also give my berries a sprinkling of coffee grounds every so often.  Once flowers start forming, water more often and deep.  Berries should have a nice shiny deep purple color and they should pull off very easy with the slightest tug for the best flavor.

Make a pie, freeze some for winter,  sprinkle over the top of whole wheat pancakes for Sunday breakfast!  Enjoy the berry season and remember to share with your husband!

Filed under Fruits from the orchard, Gardening